This column won’t follow the usual pattern of analysis and a plea for gun “control” following yet another mass shooting, except to state the obvious: United States policies regarding gun ownership are deranged. In terms of analysis, the facts have been out there for a very long time. This country simply has more guns, and more gun owners, than is sane; more guns equate to more gun deaths (see the obligatory chart below, click to enlarge). 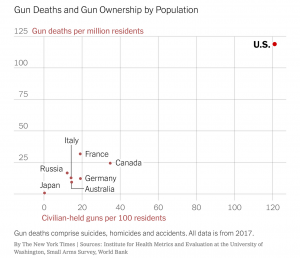 There is, at this point, no plausible way to enact meaningful gun control. If we couldn’t do this after Newtown, then we’re not going to do it at all. Anything Congress might manage to do now—and the odds against Congress doing anything at all are very high—will make very little difference in terms of everyday outcomes. Why? Because there are already some 400 million guns floating around the country, a great many of them in unstable hands. For those guns, and for the people who own them, any unlikely new law (universal background checks?—it’s a bit late for that) would be meaningless.

What needs to happen is the removal of those 400 million “loose” guns. To be absolutely clear, the guns need to be removed from their owners (they would be compensated for their value), and their owners need to be prevented from acquiring replacements. The Holy Second Amendment, which has been grossly distorted by Republicans and their conservative courts, needs to be scrapped. Nothing less than these measures will solve the current problem.

The right will scream in outrage at this—if I had a larger right-leaning audience for this blog, one or more readers might well try to shoot me (a common impulse among problematic gun lovers). The left will say what I am proposing is impossible, and these people would be right. Under our current United States government, the solution I’ve described is impossible.

So what can be done? The answer, as for so many other intractable American problems, is secession: rational people joining together to create a rational new state (the Democratic Federation of America, let’s call it). A state where individual gun ownership would be permitted only under the most tightly controlled circumstances. A state where long-standing American myths—manifest destiny, rising by one’s own bootstraps, the inalienable right to shoot oneself or others—would no longer hold sway. A democratic socialist state on the Nordic model where crime would still occur, but rarely and on a much smaller scale. Where people would have more equality, where there would be far less poverty and deprivation. A state where life seemed meaningful again.

Jettison the crazies. Start over. Don’t “build back better.” Build something new, and better.

This site uses Akismet to reduce spam. Learn how your comment data is processed.